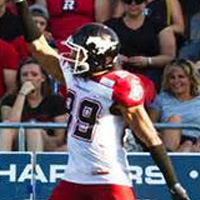 Sederrik Cunningham did something Sunday that no Calgary player had accomplished in almost seven years — take a punt return all the way to the end-zone.

Cunningham’s 67-yard touchdown was the Stamps’ first major on a punt return since Markus Howell accomplished the feat on Oct. 7, 2007, which means it’s the first punt-return score of the John Hufnagel Era in Calgary.

Calgary’s most recent kickoff-return TD was by Titus Ryan on July 1, 2009, while Larry Taylor brought a missed field goal back 125 yards for a score on July 7, 2012.

The Stamps extended their road winning streak to four games on Sunday and have won eight of their nine most recent games away from McMahon Stadium.

Calgary needs one more victory to guarantee a winning record on the road for the season, which would extend the Stamps’ streak of such seasons to five.

The Red and White previously won at Hamilton and Toronto this season and swept the East teams on the road in 2013 with victories in Montreal, Toronto, Winnipeg (then a member of the East) and Guelph (the Ticats’ temporary home while Hamilton’s new stadium was being constructed).

The Stamps haven’t lost in the East since July 12, 2012, when they dropped a one-point decision to the Alouettes.

This past weekend’s results set up one of the most eagerly anticipated Labour Day Classics in years.

Both the Stampeders and Edmonton Eskimos are a league-best 7-1 and the Alberta rivals hold down the top two spots in the CFL in both points scored and points allowed.

Over the past two years

The Stamps started the 2012 season 3-4 before recovering to finish with nine wins in the final 11 games.

Here are the cumulative standings since Week 9 of the 2012 season (excluding Ottawa, which rejoined the league this season):