The Dallas Cowboys have a great top of their linebacker group.

Sean Lee doing Sean Lee things, Jaylon Smith seemingly better than ever, and a first-round pick in Leighton Vander Esch is hard to be disappointed with.

If there’s anything we’ve learned over the last few seasons though it’s that depth at this position is important. It may not have ended in a Super Bowl victory or even a trip to the playoffs, but Anthony Hitchens helped save the Cowboys season last year by coming in when needed (which was a lot). With him gone the Cowboys lost that utility.

Damien Wilson isn’t entering his contract year with the same confidence that Hitchens did a season ago, and after that there isn’t anything that makes you sleep super comfortably at night. Well there wasn’t anything, now there’s Joe Thomas. 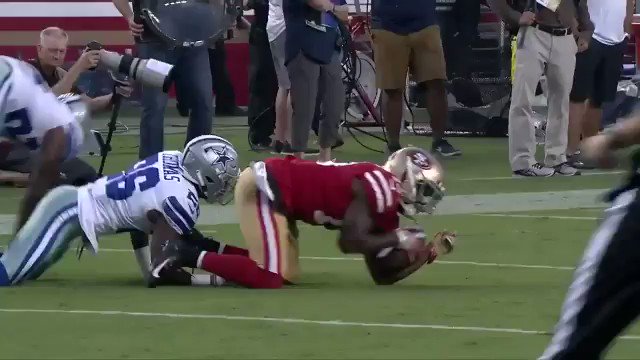 Kavon Frazier with the tip, Joe Thomas with the interception!

The mandatory disclaimer here is that it was just a preseason game but Joe Thomas tied for the team lead in the following categories:

That’s quite a day’s work for your fourth-best linebacker, even in just a preseason game. That’s the type of work that helps you feel confident that Joe Thomas can be a legitimate point of depth for the Cowboys defense.

Perhaps the most impressive part of all this is that Thomas accomplished it on just 29 total game snaps (23 defensive). Plenty of other linebackers played more and didn’t put forth the same production.

Many made jokes about Joe Thomas being the former Cleveland Browns offensive lineman when the Cowboys signed him. Things are a little bit more serious now, and there’s a whole lot less to laugh about.