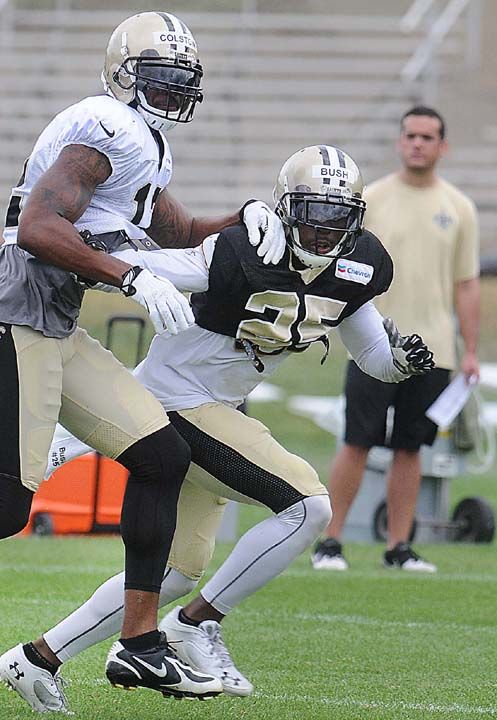 By Cam Huffman – The Register-Herald

For his first four seasons, Rafael Bush was simply looking to land on a roster — any roster. So when he had two teams fighting for his services in the offseason, Bush couldn’t help but enjoy the process.

An undrafted safety out of South Carolina State, the Williston, S.C., native started out on the Falcons practice squad, jumping back and forth from the active roster to the practice squad for two seasons, before spending a year with the Denver Broncos in 2011, when he saw his first action. He played in six games, recording six tackles. He caught the eyes of New Orleans Saints officials, who signed Bush to a contract for the 2012 season, when he saw his most significant professional action, recording 18 tackles, deflecting a pass, forcing a fumble and grabbing an interception.

Bush’s role got even bigger in 2013. He played in 13 games with the Saints and made six starts, stepping in for the injured Kenny Vaccaro. He performed well, finishing the season with 42 tackles and five pass deflections. He showed up on the highlight reels when he knocked Patriots wide receiver Danny Amendola and Seahawks all-purpose man Percy Harvin out of games with thunderous hits.

Those contributions, as well as his reputation as a special teams asset, caused the Saints to fight back when the rival Falcons signed an offer sheet worth a reported $4.5 million for two years. The Saints matched the offer on the restricted free agent, keeping Bush in New Orleans.

“There are a handful of things that come into play,” said Saints head coach Sean Payton of the decision to dish out such high dollars for a player who isn’t guaranteed to be in the starting lineup this fall. “No. 1, we think he is a real good safety. He’s also someone that can play in our three-safety package. He is also someone that is outstanding in the kicking game. Really it was about his overall ability as a football player and his skill set as a football player.

“Oftentimes, when it is another team in the division, you really have to eliminate that from swaying you with regards to whether you decide you’re going to match the offer or not. And to his credit, he’s really improved and really has good football instincts. He is someone that will be very important to us in the role he plays, both as a safety and also as a special teams player.”

Now Bush is focused on the task of proving that Saints general manager Mickey Loomis made the correct decision.

Now in his third season with the Saints, Bush said he’s more comfortable than ever and ready to improve the finer points of his game.

“It’s the second year in (defensive coordinator Rob Ryan’s) scheme,” he said. “I’m more assertive. I know what I’m doing. I know my job, and I’m not as passive as I was last year. I’m more aggressive, more vocal and just more confident.”

Bush and the Saints will take today off after five straight days of practices. They’ll return to The Greenbrier’s new $30 million practice facility Thursday for two practice sessions. The first, a padded session, will begin at 8:50 a.m. and run until 11:40 a.m. The second, an unpadded walk-through, will run from 4:30 to 5:30 p.m.