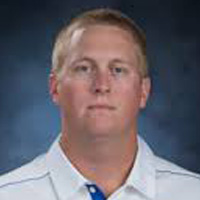 MONTGOMERY, Ala. – Only three games into his Faulkner career, quarterback Terrell Robinson continues to make quite a name for himself in NAIA football circles. A week after accounting for five touchdowns and 441 yards in a performance that earned him the Mid-South Conference’s Offensive Player of the Week honors, the senior from South Pittsburg, Tenn., one-upped himself in Saturday’s 61-34 rout of Union here at Billy D. Hilyer Stadium.

Robinson was 21-of-25 passing for 410 yards, tossing six touchdown passes in the domination of the Bulldogs. On the ground he added another 55 yards and two more scores. Wide receiver Rob Lockhart was the primary beneficiary of Robinson’s big day, catching four passes for 142 yards and three touchdowns. Jazeric Peterson, Gabe Chambers and Trent Miles also caught touchdown tosses for the Eagles.

“Terrell was just unbelievable again today,” said Faulkner head coach Charlie Boren, who is off to a 3-0 start in his first year at the helm. “He can make plays when sometimes it appears there’s nothing there. He’s that kind of talent. He’s a great player, and a great teammate. When he came out of the game in the second half, he was still right there encouraging his teammates. It’s good to see that out of your quarterback.”

Faulkner outgained Union offensively 638 yards to 440 yards, and did not turn the ball over. The Eagles did force two turnovers – one of which was an interception by Dushonta Broughton, who has picked off a pass in each of the first three Faulkner games. There were 13 penalties whistled against Boren’s team, a number he knows will have to be reduced as the Eagles move into the meat of their schedule.

“We’re still making too many mistakes on defense, and today we had a big one on special teams too,” said Boren, who watched the Bulldogs’ Jalen Ashby return a third-quarter kickoff 99 yards for a touchdown. “I think our team is getting better each week. We obviously have things we need to work on, and we’ll begin that immediately. The attitude of this team is good, and they’re ready to get back to work.”

For Robinson, the comfort level he feels in the Faulkner offense continues to grow. The 10 touchdown passes and three scoring runs the past two weeks certainly speak to that.

“There’s no question that our entire offense is feeling confident right now,” he said. “We’ve got great receivers and backs, and our offensive line is getting the job done up front. It’s really fun when everyone is on the same page and things are clicking.”

The game didn’t start out on a positive note for Faulkner, with Union taking the opening kickoff and driving 88 yards in 16 plays for a touchdown, exhausting 8:30 minutes of the first-quarter clock in the process. Quarterback Chandler Whittlesey scored the touchdown from a yard out and Alex Sigmon’s extra point put the Bulldogs on top 7-0. It took only four plays for the Eagles to answer, however, with Robinson finding Peterson on a 4-yard scoring pass. A bad snap on the extra point left Union in front 7-6.

The second and third quarters were all Faulkner, with the high-powered Eagles scoring 48 points to take complete control. Two more Robinson scoring passes countered a Whittlesey-to-Kyle Keplinger touchdown connection for Union, leaving Faulkner with a 20-14 lead in the final minute of the first half. With :03 seconds on the clock, and with Faulkner at the Bulldog 31, Robinson lofted a pass to the back of the end zone toward Lockhart, who out-jumped the Union defenders and grabbed the ball for a touchdown that gave the Eagles a 27-14 advantage at the break.

Faulkner scored the first three times it had the football in the third quarter – twice on Robinson runs of 30 and 3 yards, and the other on a 50-yard bomb to Lockhart – as the Eagles supplied the knockout punch to the visitors from Barbourville, Ky. Ashby’s kickoff return did cut into the deficit for the Bulldogs, only to see Robinson strike again, this time hitting Trent Miles from 48 yards out for his sixth touchdown pass of the afternoon. Golob’s kick pushed it to 54-21 late in the third quarter.

Union added two more scores, with Whittlesey collecting his second touchdown on a goal-line sneak and backup quarterback Alex Bell passing to Bryon Asher for 13 yards for the other. Faulkner’s final tally of the day came when reserve quarterback Truman Franklin battled his way into the end zone from 5 yards out.

Faulkner’s 226 yards on the ground came well-balanced, with Robinson’s 55 leading the way. Simon Smiley added 48 yards, while Joe Jones had 45. Miles was next with 35, with Franklin adding 25 of his own. Whittlesey finished with 199 yards passing to pace the Bulldogs (0-2), who got 62 yards rushing from Brian Clark and 42 from Whittlesey.