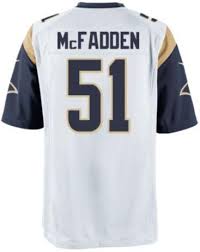 McFadden, who signed to the Rams practice squad earlier this month, gives the Rams a sixth linebacker on the roster and could become a contributor on special teams.

In adding McFadden, the Rams add someone to join a group that includes James Laurinaitis, Alec Ogletree, Jo-Lonn Dunbar, Daren Bates and Will Herring. Herring signed with the Rams on the same day McFadden joined the practice squad.

Since entering the league as an undrafted rookie from South Carolina State in 2011, McFadden has appeared in five games, with most of that work coming on special teams. He has three career tackles in that role.